Available for Pre-Order. Made the Cut - In Art and Final Development

Congress of Vienna is a diplomatic Strategy CDG for one to four players. It is based on Churchill, the superb, award-winning Mark Herman design, and was well received during GMT’s Spring 2019 Weekend at the Warehouse and June’s CSW Expo in Tempe, Arizona. It is the third game after Churchill and Pericles in GMT’s “Great Statesmen” series.
CoV creates an enthralling gaming arena. It allows players to become the main characters of the dramatic, titanic struggle between the struggling Napoleonic Empire and the coalition of Russia, Austria, and Great Britain (with their Prussian, Spanish, Portuguese, and Swedish allies).
The game starts after Napoleon’s disastrous 1812 retreat from Moscow, covering the decisive years of 1813 and 1814. The abstract game map involves a strategic theatre portraying Europe from the Iberian Peninsula to the boundaries of Poland and Prussia. It also includes the secondary front of Italy, an area for depicting maritime warfare and the British/American War of 1812. This game by designer Frank Esparrago and developer Dick Sauer (with much appreciated input from Mark Herman) has been created to be played as both a diplomatic and strategic military conflict without losing the taste of the Napoleonic era’s great battles.
All tables necessary for gameplay are printed on the game board. Congress of Vienna reproduces the spirit of Churchill in the mechanics and organization of its rules, diplomatic display, and its military map.

Historical Context and Congress of Vienna Scenarios
CoV recreates The Full Campaign (10 turns) with a low density of pieces: 14 army blocks and other auxiliary counters. The game also includes three shorter scenarios: (i) The Spring Campaign of Saxony in 1813; (ii) The German Liberation War of 1813; and (iii) The 1814 Campaign for France. Each turn, players decide the most important geopolitical issues for their nation and the strategy to achieve them: high diplomatic and organizational efforts will be needed. If you’re a fan of multiplayer games involving persuasion–often intense and occasionally desperate with your nation’s fate at stake…this is for you!
The aim of the game is to become the leading European power at the end of the Napoleonic Wars by employing a wise combination of negotiation and resources. Bludgeon-like tactics are doomed to fail; whereas deliberation and elegant finesse among ambassadors are key characteristics for successful CoV play. Nevertheless, armies and generals will be ready to do their duty and carry out military operations which culminate in dramatic battles across Europe and America. This is a fight for the soul of a continent. Will the Europe the players create entrench the rule of autocracy or shall the spirit of liberalism prevail?
Replayability is assured by CoV’s Card Driven Game (CDG) design. The deck of Initial Turn cards along with traditional CDG cards (play the event or the card’s numerical value) through the Diplomacy and Negotiation Segments ensure a fun and exciting game every time the box is opened. Furthermore, another deck of cards, called Handicap Cards, has been developed. These allow more playability and offer balancing factors to help inexperienced CoV gamers learn how to play, be competitive, and best enjoy the game.
There are 100 small markers to designate military units: white for Austrian, green for Russian, blue for French, black for Prussian, red for British, yellow for Spanish, carmine for Portuguese, light green for Swedish, orange for King Joseph's satellite, and light blue for American, with 8 brown pieces to indicate British Fleets. These military units fight within an army. An army is represented by a large token which marks its position, along with its military units placed in their respective “Army Boxes” near each player’s National Track.
Photos of a Congress of Vienna Playtest Game Underway with the Designer (in a burgundy colored sweater) Intently Looking On: 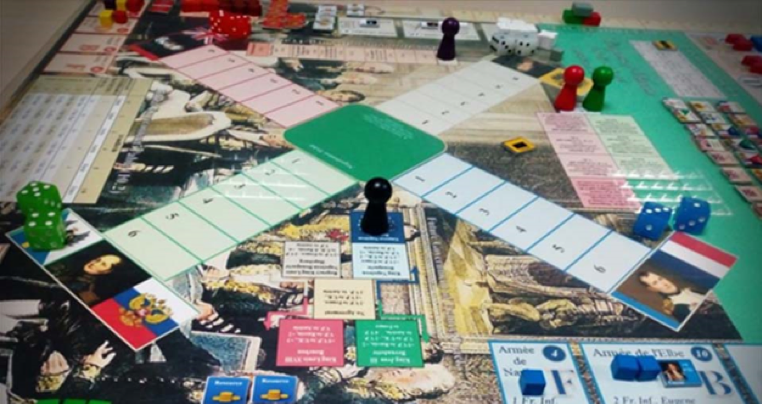 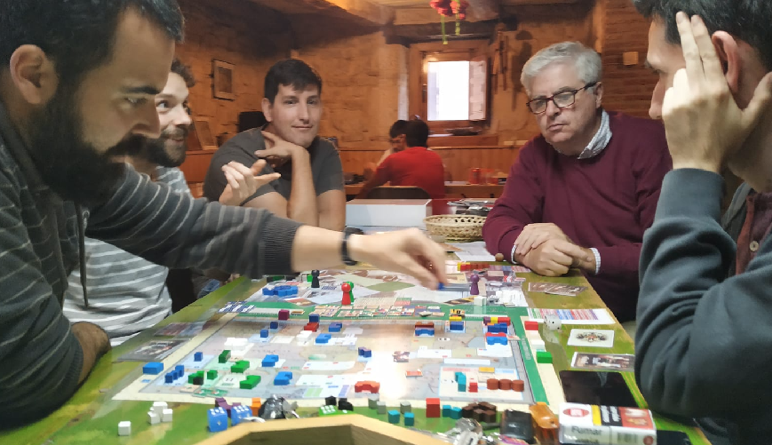 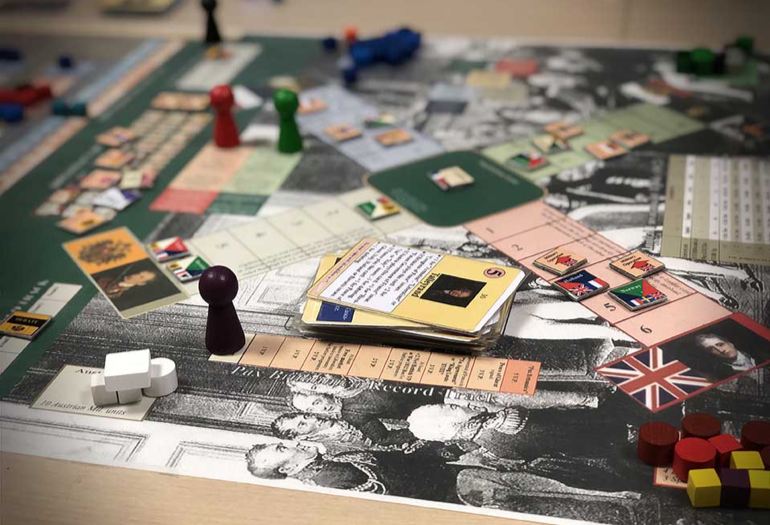 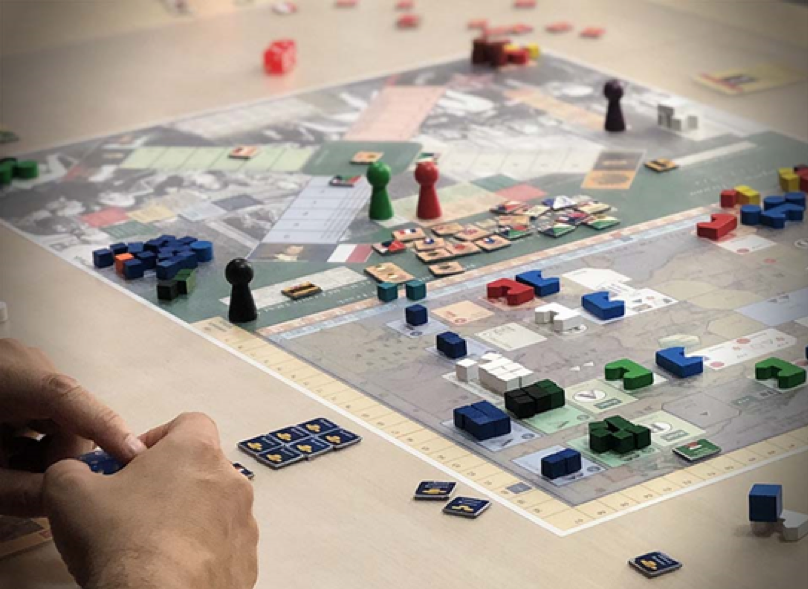 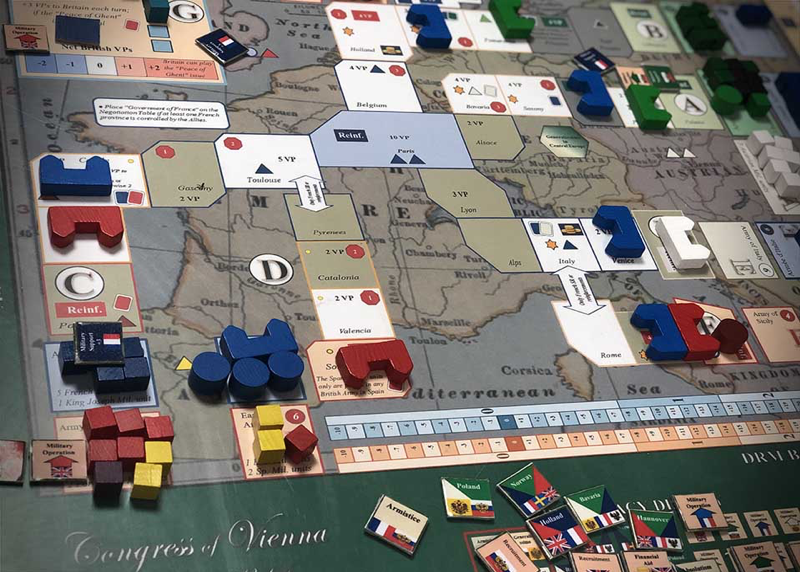 Continuous Interaction: Players’ Diplomatic, Political, & Military Decisions
A CoV game turn is divided into three different Phases: Diplomacy, Government, and War; each divided into segments that facilitate interaction between players. In the Diplomacy Phase, the leaders of each Major Power and associated minor countries use their best statesmen to interact on the European diplomatic board to improve their economic and military resources and to prioritize efforts in different military fronts. During the Government Phase, the issues gained during Diplomacy are implemented. These take into account the limitations of each Major Power in terms of manpower, economic resources, political impact, and the military situation on the map. In the War Phase, in addition to recruiting new forces and moving them to campaigning armies, military operations are undertaken which on many occasions lead to huge and dramatic battles. CoV's system of Victory Points (VP) reward military, diplomatic, political, and economic achievements, so situationally balancing these factors usually prevails over giving sole attention to the game’s military aspects.
The Cards of Congress of Vienna
An Initial Situation Card is revealed at the beginning of every turn. Each card has colored bands denoting which situations–based on historical context–affect players for the turn. Likewise, each turn’s War in America and Maritime Warfare is resolved by the Initial Environment Table. There is a single 64-card deck with events, staff, and political leaders. These cards are color coded: Russian (green), Austrian (white), British (red), French (blue), or Neutral (pink).
Each Staff card represents a historic figure, and each Event card indicates a historical event. Cards have a numerical value and text describing its special abilities or penalties when played. Staff and Event cards are played during the Diplomacy Phase to nominate, advance, and debate issues or trade with other players; these cards may also be held for use during the subsequent War Phase. Cards with a military use are indicated with a salient white "M" in a red box in their upper right corner.
Each turn the deck of Staff & Event cards are shuffled, and the cards are dealt to the players. You may receive cards for your own nation, other players’ nations, or neutral cards. Usually a card from a player's own nation has bonuses for its diplomatic, economic, or military use. Conversely, playing another Power’s card can sometimes result in limitations and penalties. See sample cards below:

Some Possible Major Power Strategies
The Austrian player has limitations on resources and manpower. Austria has been repeatedly defeated by France and weakened by treaty, and it is not on a firm military footing when the game commences. The Austrian player must decide (among other issues) when to abandon neutrality and enter the war, in which minor countries to place political influence, who will be the Coalition Generalissimo (supreme military leader to contend against Napoleon), how to best promote Absolutism in Europe, where to send Austrian armies (when the time comes, between Italy, Germany, or both theaters), whether to seek the complete destruction of Napoleon or to promote a Peace Congress, and, finally, how to treat the Russian colossus about to stride across Europe.
The British player will have to face issues such as: how to best support his Allies (for if they go unaided, the French will be at an advantage), how to manage his vast financial resources in view of his own manpower shortages, whether Wellington’s powerful army will press on into the south of France or disembark to other parts of Europe, whether to take the initiative in the ongoing and draining American War or accept defeat and accept the loss of Canada, how to best deal with an ambitious Russian Tsar, protecting free trade as much as possible, and determining how the world post-war situation should be.
The Russian player (who also controls Prussia) will face only France at the beginning of the war in Central Europe, but what next? Shall he advance into Germany to reinforce Prussia? Shall he seek an armistice which could provide Austria an opportunity to join the fight, or shall he follow a course of continuous all-out war? Will he attack the still formidable Napoleon or focus on other minor French armies where Napoleon is not present? Who will lead the coalition? How shall Poland, Saxony, Norway, and the German minor states find themselves at the war’s end? Will the Tsar’s fervent autocratic desires for a European governing framework be fulfilled?
The French player has many options, resources, and manpower, but he also has too many enemies bent on revenge, and Napoleon can’t be everywhere at once!  Shall he leave Spain (the ulcer that it is) and focus on the struggle in Germany? Shall he go for England in a maritime struggle or support America in its war with Britain? Shall France negotiate a general peace agreement in Europe? Where and when will Napoleon rebuild his Grande Armée, lost in the Russian debacle? How will he approach the relationship with Austria, an Austria not at war when the game begins? Will France defend Western Germany, or shall it strike deep into Prussia? As the preceding indicates, CoV offers its players a number of fascinating options to consider.
Scale
Components