This battle is the First Contact of the Ulm campaign.  It set the tone for the entire campaign and gave the French an immense boost of confidence.  Napoleon has ordered his Advance Guard, consisting of part of Murat's Reserve Cavalry and Lannes' Vth Corps, to begin the swing around to the south and east of Ulm, in order to cut off Mack from Vienna.  Mack, being a bit in the dark about the French maneuvers, sent a force under Baron Auffenberg, to determine where the French were.  The Baron's force marched into a very bad situation where his troops, mostly grenadiers, was seriously outnumbered.  A member of the French Impaerial Staff, General Kellerman, happened to be forward with the troops.  He saw a small group of Austrians in the town of Hohenreichen and ordered the Dragoons he was with the dismount and clear out the Austrians.  It was a small affair, but one that showcased the Dragoons ability to fight as infantry.  The Dragoons success in pushing out the small Austrian force led to the scenarios that are included in the game.  In the end the Austrian force was eliminated as a threat to Napoleons plan to surround and capture Mack's force. 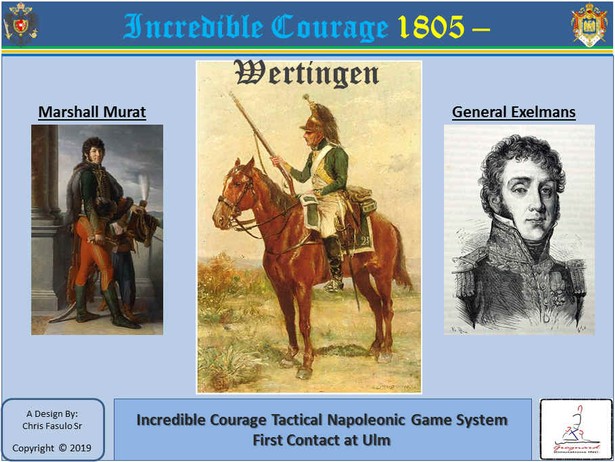 Map Sample showning the area of the main battle between the Austrian squares and the French cavalry. 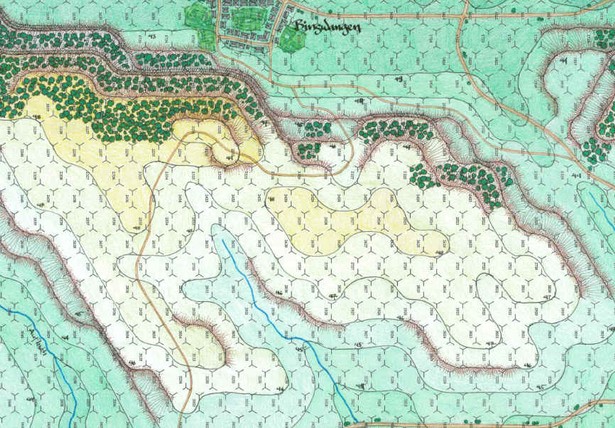 The game features adjustable strengths (that help decide firepower and melee strength based on formations). Turns are 10 minutes of time.  A few special features are adjustable strengths, elite units, and Levels of Order (LoO).  Units start with a certain amount of these LoO and as they lose them their abilities are reduced.  Movement of each division level formation is randomized through a Leadership factor for each commander at that level.  This game is a good introductory game for the Incredible Courage system.  The level of fidelity and the level of playability have been mixed extremely well.  Players will need to analyze many differing factors to apply the winning tactics to the battlefield.  They will also be forced to consider contingencies since units will not always have the strength that they normally would.   No gaming the combat system here by calculating the exact number of factors needed for a certain odds column.  You will never know what the odds column will be until the combat is ready to be conducted.  This battle will provide a challenge to both players.
Game play is excellent for solitaire play and moves along very quickly.  The randomized movement allows for very interactive action and you won't be sitting around waiting for the other player to finish.

Sample units for IC 1805 - Wertingen.  Austrians above and French below.