Incredible Courage at Austerlitz - Pratzen adds the fight for the Pratzen Heights to the southern part of the fighting at Telnitz, in the Austerlitz battle. The game adds (16) 11 x 17 map sheets to the 5 for Telnitz and encompasses the area from Sokolnitz Castle up to the area where Napoleon and the Imperial Guard started the battle around The Zurlan Hill. The fighting forces added include the remaining 2 divisions of the French IV Corps, Imperial Guard, Grenadier Division, and I Corps. These forces easily managed to defeat the Russian 3rd, 4th, and 5th Columns, and the Russian Imperial Guard. This is the game where Guard meets Guard. The Russian Guard is surely larger than the French, play this game to see how the French managed to defeat the Russians and send them routing away in what would end in the Coalition force being destroyed. Initial copies of Pratzen will contain replacement maps for Telnitz and a replacement scenario card at no extra cost. 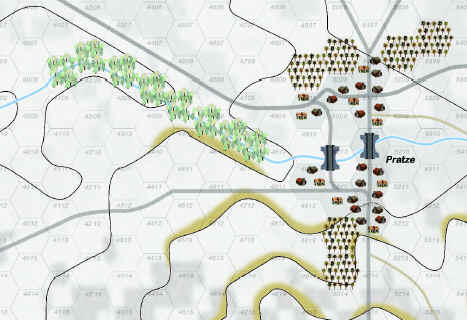