Incredible Courage at Austerlitz - Telnitz is GSI's first offering on Napoleonic warfare. The game focuses on tactical level combat and maneuver during the Battle of Austerlitz in December 1805.
The game features variable combat strengths. Turns are 10 minutes of time.   The rules are modeled around the seven battlefield operating systems which make them easily understood and easy to learn.  Unlike other games at this level the rules will not be massive.  Troop replacements are generated by returning stragglers to the battle.  A few features are variable combat strengths, elite units, and levels of order.  Units start with a certain amount of these and as they lose them their abilities are reduced.
Buxhowden came down off the Pratzen Heights to attack the French right since it was so weak.  Little did he know that while this was true at 0700 in the morning the Iron Marshall, Davout, would arrive shortly and provide the bulwark against which the defense would halt and then throw back the Coalition forces.

Similar to the Death Ride series this game is the first of many that wplayers will be able to build into a larger monster of the Austerlitz battle. Again critical thinking will allow the players to figure out the correct formations and deployment of their troops. Infantry units are modeled at the company level, cavalry at the squadron level, and artillery at the section level. The rules for this detailed game will surprise you with their clarity and brevity. 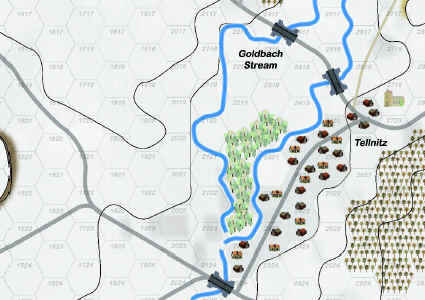